The Republic of Indonesia is the largest island country in the world by the number of islands.
It is composed of more than 14 000 islands and represents 255 million people.
The island with the biggest concentration of inhabitants (more than half of the country’s population) is Java, whose capital city is Jakarta.
Indonesia shares land borders with Papua New Guinea, East Timor and the Malaysian Borneo.

Bali is an island of Indonesia and is a province that includes the islands of Nusa Penida, Nusa Lembongan and Nusa Ceningan. It is situated between Java to the west and Lombok to the east.
The area is of 5,780.06 km2 with 4,225,354 inhabitants (including an estimated 30,000 expatriates). The capital and biggest city is Denpasar.

The first europeans to explore Bali in 1512 were Portuguese with Antonio Abreu and Francisco Serrao as leaders of the expedition. Later on, the Dutch explorer Cornelis de Houtman arrived in Bali in 1597 and the Dutch East India Company was established in 1602.
Then, during Word War II, Bali was under the occupation of the Imperial Japan.
In 1949, Indonesian independence was claimed by the Netherlands.

Economy’s main sector is tourism although agriculture employs a significant part of the population with rice cultivation.
In 1963, the Mount Agung volcano erupted which killed thousands of people and also triggered an  economic disaster.

Bali is part of the Coral Triangle which represents the area with the highest marine biodiversity.
The island is home to many endemic species and contained several large mammals until the early 20th century: the wild banteng (nowadays there are only domestic ones), leopards (only found in Java now) and the endemic Bali tiger that is now extinct.

Bali is renowned for its performing arts (traditional and modern danse), batik handcrafts, metalworking and music. 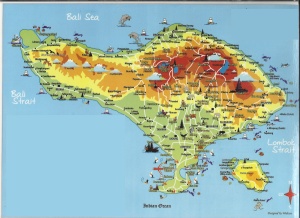