Republic of Chile is a South American country that borders Peru to the north, Bolivia to the northeast, Argentina to the east, the Drake Passage in the south and Pacific Ocean to the west.
The Pacific islands of Juan Fernandez, Salas y Gomes, Desventuradas and Easter Island are part of the Chilean territory.
Chile also claims about 1,250,000 square kilometers of Antartica, although the Antarctic Treaty suspended all claims.
In total, it covers an area of 756,096.3 km2 and the population is estimated 18,006,407 inhabitants.
The most recent ethnographic study in the Candela Project reports that Chilean people’s genes are made of 52% of European origin, 44% of the genome coming from Native Americans (Amerindians) and 4% coming from Africa.

The origin of human presence dates back to 18,500 years ago.
The first European to touch the Chilean land was Ferdinand Magellan in 1520 when he discovered the southern passage that is now the Strait of Magellan.
Chile was colonized by Spain in the mid-16th century especially the northern and central Chile.
The independence from Spain was declared in 1818 which was followed by a significant economic and territorial growth, the end of Mapuche resistance in the 1880s and the conquest of northern territory in the War of the Pacific (1879-83).
In 1973, a bloody Chilean coup d’état changed the democratically-elected left-wing government of Salvador Allende to a 16-years-long right-wing military dictatorship headed by Augusto Pinochet until 1990.

Chile is one of South America’s most stable and prosperous nations. In 2006, Chile became the country with the highest nominal GDP per capita in Latin America.
Copper mining (essentially found in the Atacama Desert) makes up 20% of Chilean GDP and 60% of exports.

Chile is a country with beautiful natural sites that makes it very attractive for tourists: San Pedro de Atacama in the north, many national parks in the south (the most popular being Conguillio National Park), Chiloé Archipelago and Patagonia which includes Laguna San Rafael National Park, with many glaciers, and the Torres del Paine National Park. 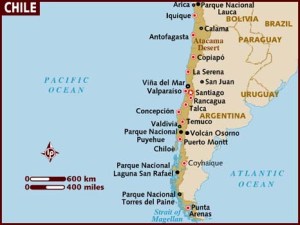