AMA (Agrupacion Medio Ambiental) Torres del Paine is an environmental organization created in 2004 and located in Torres del Paine National Park in Chilean Patagonia.
The objective of AMA is to support biodiversity conservation, scientific investigation and environmental education in order to minimize the impact of humans on environment and preserve natural resources of the area.
In 2005 and 2011, Torres del Paine National Park was devastated by fire caused by irresponsible tourists. This event led AMA to set up a reforestation project by appealing to volunteers’ generosity. Their idea was then to offer eco-volunteering that allows people to act in favor of nature conservation.
The National Park is mainly populated by Lenga trees, native to the southern Andes range in the temperate forests of Chile and Argentina. The main program of AMA is therefore the lenga tree reforestation through different projects: the lenga tree nursery project, lenga seed project, school camps.

As a nature lover, I chose this organization because I wanted to be part of an environmental conservation program during 2 weeks and Torres del Paine National Park is so marvelous.
We were a team of 7 volunteers, all wishing to have a new experience and work for a great cause in natural and beautiful fields.
We worked from 9 am to 5 pm with breakfast, lunch and diner breaks. We were sleeping in a dome, an big  eco-camp with a capacity of ten beds. 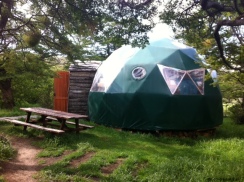 We intervened on different projects:

– Lenga tree nursery: we had to count, water and maintain thousands of Lenga baby trees, ready to be planted. – Trail restoration: we had to create a path with stones to delimitate the way used by trekkers. This aim of this work was to count visitors with a cycle counter in order to have an idea of the number of visitors in the National Park.
Likewise, we had to created marked path with wooden markers for tourists to respect the Interpretative trail. 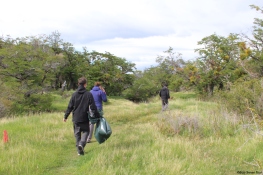 – Creation and restoration of signage: We had to create signages to put as indications for trail users. We used wooden boards that we had to carve with specific machines and to varnish. 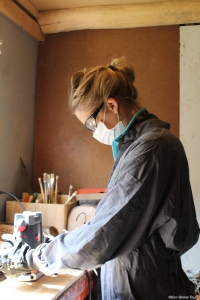 Ready to be planted

– Native Bumblebees, pumas and huemuls census: we hiked during hours to investigate and take a census of endangered animals.

To be volunteer in this pure area, being surrounded by wild animals and snow-covered mountains was a magic experience.
With eco-volunteering, we all feel the great need to act for the preservation of natural environments such as this one.
Join the organization as a volunteer and be enchanted by this mystic area!

Aperitif on the grass 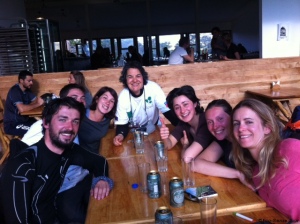 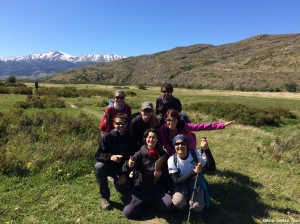