Phong Nha-Ke Bang was originally designated as a Nature Reserve in 1986 and became a National Park in 2001. It is under the responsibility of the Management Board that is in charge of the forest resources and biodiversity protection since 1994.
The Phong Nha-Ke Bang National Park covers a surface of 126,236 hectares and shares a boundary with the Hin Namno Nature Reserve in the People Democratic Republic of Laos.
It was inscribed on the World Heritage List in 2003 for its large number of caves and underground rivers (104 km)and its limestone plateaux (one of the 2 largest limestone regions in the world) and tropical forests.
The National Park has become one of Vietnam’s major attractions especially with the visits of the world’s largest river cave Hang Son Doong Cave that was discovered in 2009, explored in 2011 by a Bristish geologist team.

In the past, the caves of this region were used as hospitals, bomb shelters during the American war.
Today the property is the refugee of primary and secondary forest, tropical dense forests and savanna as well as a large number of faunal species with 154 mammals, 117 reptiles, 58 amphibians, 314 birds and 170 fish recently counted.

Come to discover this outstanding limestone karst ecosystem which is unique in the world! 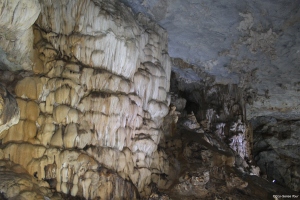